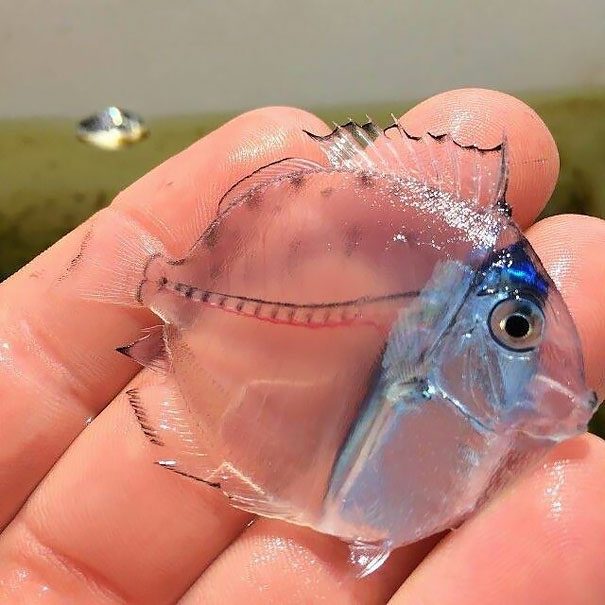 Check out these animals, although you’ll have to look closely. Why? Because they’re invisible! Well ok, maybe not, but they are transparent. Want to know why many of the animals featured below are sea-dwelling creatures? The answer is all about self-preservation. As pointed out by Scientific American’s Sönke Johnsen, “almost all open ocean animals not otherwise protected by teeth, toxins, speed or small size have some degree of invisibility.”

This transparent fish is a Juvenile Surgeonfish. They’re found in a wide range of waters including those around New Zealand. Believe it or not, it’s the same species of fish as Dory from Finding Nemo/Dory! They can grow up to 30cm (12 inches) long and are popular aquarium fish. (source: wikipedia) This is a larval form of a Pacific sand sole (Psettichthys melanostictus), a species that can grow to 63 cm. The transparency of the larval fish serves as camouflage, reducing the chances of it being eaten before reaching the life stage where it settles to the ocean bottom and hides on and in the sand. (source) This is a juvenile sharpear enope squid (Ancistrocheirus lesueurii). Its transparent body is covered with polka dots of pigment-filled cells, and below its eyes are bioluminescent organs. They may be found throughout the tropical and subtropical oceans, often at depths of between 200-1000 metres. (source: telegraph, wikipedia) The tortoise shell beetle is not completely transparent, but it does have a carapace that is nearly invisible. The purpose of the transparent outer shell is to fool potential predators, as it reveals markings on its back that act as a warning. Tortoise beetles come in many different varieties, and the design under their clear shells can be distinct and beautiful. (source) European Eels change colors several times throughout their lives. They start off transparent before turning brownish-yellow on their sides and belly. After 5–20 years in fresh or brackish water, the eels become sexually mature, their eyes grow larger, their flanks become silver, and their bellies white in color. In this stage, the eels are known as “silver eels.” (source: wikipedia) Hyperolius leucotaenius is a species of frog in the Hyperoliidae family. It is endemic to Democratic Republic of the Congo. At one time thought to be extinct, in 2011 Hyperolius leucotaenius was found and photographed on the banks of the Elila River, a tributary of the Lualaba, during an expedition led by Eli Greenbaum of the University of Texas El Paso. (source: wikipedia) Macropinna microstoma is the only species of fish in the genus Macropinna, belonging to the Opisthoproctidae, the barreleye family. It is recognized for a highly unusual transparent, fluid-filled dome on its head, through which the lenses of its eyes can be seen. M. microstoma has been known to science since 1939, but is not known to have been photographed alive until 2004. The pharaoh ant (Monomorium pharaonis) is a small (2 mm) yellow or light brown, almost transparent ant notorious for being a major indoor nuisance pest, especially in hospitals.[1] The pharaoh ant, whose origins are unknown, has now been introduced to virtually every area of the world, including Europe, the Americas, Australasia and Southeast Asia. (source: wikipedia)