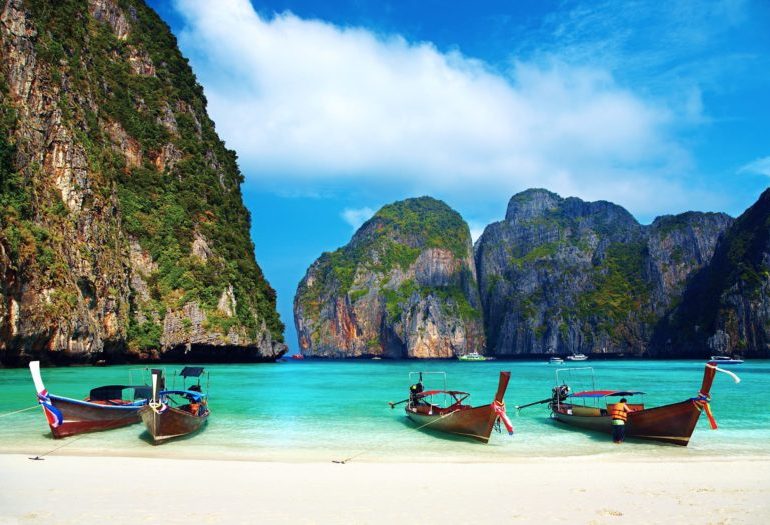 The islands are administratively part of Krabi province.Just a 45-minute speedboat trip or a 90-minute ferryboat ride from either Phuket or Krabi, these picture postcard islands offer the ultimate tropical getaway. Maya Bay, Location for the Movie “The Beach”

The second largest uninhabited island, Ko Phi Phi Lee (or “Ko Phi Phi Leh”), are visited by many people as well and hosts stunningly beautiful bays and beaches, including the world-famous Maya Bay, which was the set where “The Beach” (with Leonardo Di Caprio) was filmed.
This attracted criticism, with claims that the film company had damaged the island’s environment, since the producers bulldozed beach areas and planted palm trees to make it resemble description in the book, an accusation the film’s makers contest. An increase in tourism was attributed to the film’s release, which resulted in increases in waste on the Islands, and more developments in and around the Phi Phi Don Village. Phi Phi Lee also houses the “Viking Cave”, where there is a thriving industry harvesting edible bird’s nest. Set foot in Maya Beach, you like being included in a different world. The beach is located not too flashy, and even tend hidden behind the rocks. Therefore, when you enter the Maya Beach area, you like discovering a treasure trove of incredible views. The rest of the islands in the group, including Bida Nok, Bida Noi, and Bamboo Island (Ko Mai Phai), are not much more than large limestone rocks jutting out of the sea. The Islands are reachable by speedboats or Long-tail boats most often from Krabi Town or from various piers in Phuket Province.